Late Sunday afternoon, I let Daisy out to survey her domain and I stood looking through the window so I wouldn't end up doing something productive on accident. After a few minutes, I realized I was staring at a deer and that Daisy, with her superior canine senses, hadn't noticed at all. I went and got Spork so he could see, too, and when we returned to the window, there was an adult and twin fawns. Spork ran to get the camera, but by they time he returned, only one of the Bambis was still in view. 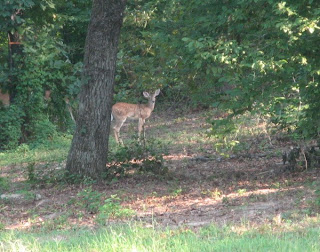 Yesterday morning we took Arlo and Daisy for their daily walk and when we finished, we found out we had been followed home by two dogs. At first we assumed that they were neighbor dogs out for an adventure, but now we're pretty sure they were abandoned. They have that haunted look that homeless dogs get and even though it's been raining all night, they are still sitting outside our door. 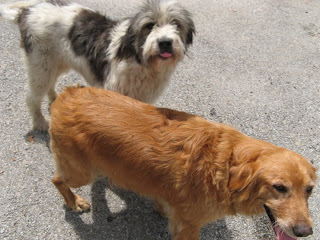 The black and white dog is a neutered male of undetermined pedigree. The other dog is a female golden retriever and appears to be fairly old. They are both really sweet and submissive, to the point that Arlo intimidates them.

I understand that sometimes circumstances can force someone to find a new home for an animal, but I have no sympathy for the slimy kind of person that just tosses them out to fend for themselves. I've been taking care of their discards all my life and I am beginning to get bitter about it.

Kari
After a few years as a city girl, I'm now back in the country. My husband and I are looking forward to building a house soon, but in the meantime we're enjoying the wildlife around our little shack in the woods.